Susan
Maple Ridge, British Columbia, Canada
I am happiest when I am out with my camera. Always looking for the bright side. Usually I find it! Please contact me via comment if you wish to use any of my photography. Thanks for stopping by. 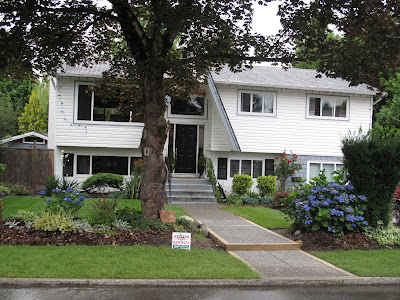 This is my house last summer. I took this to show off the new path that we had laboured over to install with our own hands! Later we installed the 4x4 ties around the garden beds to finish it off. It was sooo pretty with the nice new grass sod. 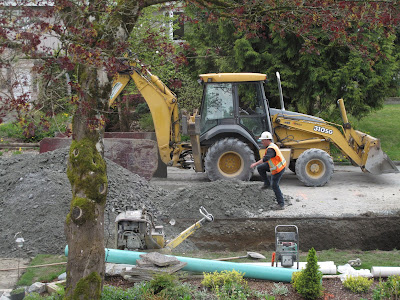 
The reason for all this is that our neighbourhood, including the closest 4 streets was flooded. We have been battling near misses for years. When we get the Monsoons that we are prone to, all the neighbours are out with pumps and gumboots working hard not to allow the water into their homes.

One of our neighbours sons is an engineer and he found out that we only had 7 inch storm drains which were far too little capacity for the rain we get here. When we get a good downpour, the drains back up, then the road becomes a river and then the homes on the north side of the road have runoff coming down their driveways. The water going down the downspouts has nowhere to go so it backs up around the foundations. 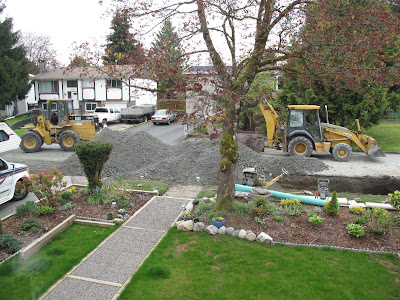 Click here to see THIS POST last year to see what we did to improve our drainage. It worked too, we havent had a problem on our property since we did THIS. 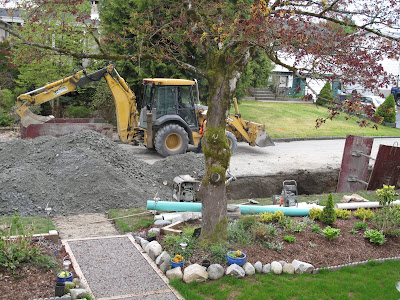 The last bit of the path got unpaved and the corners of the ties had to be pulled up. We had to lift these out because we were worried that the workers would just bulldoze over it.

When they dug up the road, they blocked the drain near us. That night, we had a huge rainfall and all that water ran into my next door neighbours house, flooding her basement yet again!!! She called the citys emergency line but nobody came to help her because there was a hockey game on! Keith and I had gone to that game. By the time we got home from Vancouver 90 minutes later, the rain had stopped and the crew still had not shown up to assist her. Dont you love how they chuck their pipes into my flower bed? Well, if it fixes the problem for the neighbourhood, I suppose it is worth it!
Posted by Susan at 10:52 PM

I think these kind of works are a pain when they are in progress and its hard to see the benefits, until you get heavy rain!